Alexander Balanescu is one of the most exciting violinists of our time with a clear vision. He is also a prolific composer.  He studied the violin at the Juilliard school in New York and was a member of the Arditti Quartet from 1983 until 1987. Hereafter he formed his own Balanescu Quartet. Working with people like  Michael Nyman and Gavin Bryars, but also through projects with e.g. Ornette Coleman, David Byrne, Kate Bush and the Pet Shop Boys the quartet has developed a highly individual style of composing, using contemporay classical music, avant-garde, rock and world music as inspiration.
The live performances are notable for their sheer energy and dynamism, more characteristic of a rock band rather than a string quartet. Balanescu writes all the material for the quartet, often for modern dance performances, television or film, and is constantly looking for possibilities to present his music in a new context. 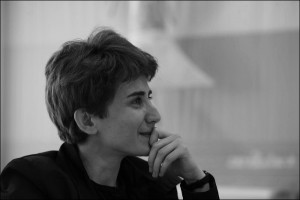 Ada Milea is born in 1975 in Tirgu Mures (Romania) and graduated from The Dramatic Arts University of Tirgu Mures. She was an actress between 1997 and 1999 at the National Theatre of Tirgu Mures, after which she decided to be an independent artist. She experiments with the links between theatrical and musical fields. She also gives many concerts as a singer, from Romania to the USA.